Produced and distributed by two media giants such as Netflix and BBC, Retribution , a.k.a One of Us in the UK, conquers in just 4 episodes a level of drama and suspense that lots of 20-something episodes per season series couldn’t achieve even over several years on screen.

1 ^ Who are the members of the two lead families in Retribution?

The two lead families of the story are The Elliots and The Douglases.Both families share a piece of land at the end of a mountainous terrain in the Highlands, in Scotland.Living in two different houses, but sharing the same zip code, the families seem to enjoy the rural environment just a few minutes away from Braeston, a small town not too far from Edinburgh. Let’s know them all. 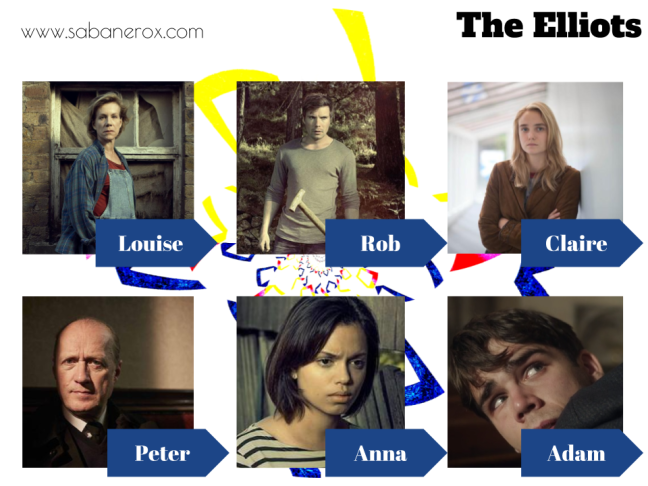 Louise (Juliet Stevenson) She’s the matriarch and head of the Elliot family.Despite being abandoned by her husband when their children were still very young, Louise managed to provide food, education and values to all of them.She is fond of hunting and has some issues with the alcohol.

Rob (Joe Dempsie) He’s the older of Louise’s two sons. In the absence of his father, Rob became the man of the house and the fundamental support for his mother; even after he pursued a life of his own in Edinburgh with his girlfriend, Anna.Under pressure, Rob usually reacts with some degree of violence.

Claire (Joanna Vanderham) She’s Louise’s only daughter. She is the character that most fits the definition of protagonist within the series.She works as a nurse, assisting Meredith, an elderly woman who desperately wants the euthanasia for herself, an aspiration that Claire does not agree with.

Peter (Adrian Edmondson) He’s the father of Rob, Claire and Adam and Louise’s ex-husband. He left his family and then pursued a new life in London his life with another woman. On his way back to Braeston, from London, he committed suicide.

Anna (Georgina Campbell) She is Rob’s permanent partner (you would say girlfriend, perhaps?). Anna was raped by a man named Graham Harris, but by some technicality or error in the procedure of capture or prosecution, the man remained free.Anna has tried to put what happened with Harris in the past, but Rob’s obsession with punishing the rapist has created issues in their relationship.

Adam  (Jeremy Neumark Jones) The younger of Louise’s sons. Brother of Rob and Claire, he was killed by Lee Walsh.He grew up with Grace Douglas in Braeston and since childhood they developed a bond that eventually led to marriage.

Bill (John Lynch) A vet, known for being a very religious man.Despite his apparently passive nature, he is physically very strong.

Moira (Julie Graham) She’s Bill’s wife and Grace and Jamie’s mother. She keeps a very complicated relationship with her husband, Bill, who usually pays little attention to her. She’s sexually very active, having an affair with Bill’s employee, Alistair.

Jaime (Christian Ortega) He is the only son of the Douglases, he is addicted to video games, as well as everything related to social networks and computers. He was involved in a huge problem with the police when he took a gun to the school, and despite he claims he regrets what he did, his behavior is very unusual all the time.

Grace (Kate Bracken) The only daughter of the Douglases and wife of Adam Elliot, she was murdered by Lee Walsh.

Detective Juliet Wallace (Laura Fraser) She is the detective assigned to solve the murder of Grace Douglas and Adam Elliot, as well as the alleged connection of this case to the disappearance of the main suspect, Lee Walsh. Although she is a very straight police officer, she commits a serious indiscretion when she provides drugs to a local distributor called Jay, in order to pay a surgery for her daughter.

Detective Andrew Barker (Steve Evets) He is Juliet’s partner, and she considers him lazy and not a very active asset for the police force.

Alastair (Gary Lewis) He is the steward and foreman of Bill Douglas. Despite being married to Sal, he keeps an affair with the wife of his employer, Moira.

Sal (Kate Dickie) She is the unsatisfied wife of Alastair, who desperately looks for a way to escape from that relationship. For year,s she has tried unsuccessfully to recover her marriage but, without any success, she figures out a plan to leave for good.

Jay (Chris Fulton) He’s a local drug dealer. After one of his salesmen was caught, the police sends him to prison. Jay blackmails Juliet with revealing that she gave him drugs, if she doesn’t help him to get out.

Lee Walsh (Owen Whitelaw) He is the murderer of Grace Douglas and Adam Elliot, who mysteriously shows up in the lands of the Elliot and the Douglases in a stolen car. The two families tie him in a barn, where he is killed. The problem is that nobody in the two families acknowledge the crime.

2 ^ Who killed Grace and Adam and why?

Although Lee Walsh was the one who killed Grace and Adam, it was Bill Douglas who took advantage of the man’s need for money to buy drugs to force him to commit the murders.

The matter goes like this: Bill has no reason to think Grace and Jamie were not his children, until he was diagnosed with Parkinson’s.Bill asked Grace and Jamie to go to the lab and get tested to confirm or rule out they had inherited the disease, but what he discovered is that they were not his children.Bill knew Moira had an affair with Peter Elliot, and he stole one of Adam’s hair and confirmed that indeed, Grace was Peter’s biological daughter, and therefore sister of her own brother.

Bill told Adam the truth right after his marriage to Grace, when she was already pregnant.Adam took Grace out for the honeymoon and once there, he tried to contact his father to confirm that Bill had told him the truth, but his father never answered.

Bill could not bear the idea that Adam and Grace, being biological siblings were living as husband and wife, and on top of that they were expecting a child.That’s why he paid Lee Walsh to kill them. Well, he actually sent him to kill Adam, but when Grace showed up in the apartment, Walsh had no option than to kill her too.

3 ^ Why did Lee Walsh end up in Braeston?

One of two options 1) Walsh wanted the rest of the money Bill promised him or 2) he just felt guilty and decided to go to Braeston and kill the man who forced him to kill his own daughter.

The first option is not too likely, since Bill had promised Walsh that in a week he would give him the money and  Walsh has no reason to think otherwise. Now, the second option was more plausible. Lee Walsh was sorry for killing two people, one of them a pregnant woman and decided to go for Bill.What he did not count on was that he was going to crash before reaching his goal.

Logic points that it was Bill himself who murdered Lee Walsh, after all the jonkey was a danger that eventually could reveal the truth about the murders of Grace and Adam, but what if it was not him?

At the end of the fourth episode Claire tells Meredith, the lady she cares for, that she will probably go to jail. Why? Bill had confessed and there was not the remotest possibility that she would end up in jail, unless it was she who, in a fit of rage for her brother Adam, had sliced ​​Walsh’s throat.

Besides, Bill did not specifically confess that he had murdered Walsh, but that he had gotten rid of the knife. Could Claire be Walsh’s killer?

5 ^ Why did Rob confess if he didn’t kill Walsh?

To protect Anna. Bill had left the knife in the heater of Rob’s room, to get rid of it. Rob had been the main suspect then, but he thought that in addition to him, the only person with access to the room had been Anna.Rob decided to avoid any pain to the woman he loved, and took responsibility for the crime, until Bill’s confession freed him of any charge.

In the end Rob recognized that he made a mistake by overprotecting Anna, and not by supporting her. And that precisely was the reason Anna ended up leaving him.

6 ^ Why did not Moira stop Adam and Grace from getting married if she knew they were siblings?

Moira’s case is strange. To summarize, I do not think she knew for a fact that Adam and Grace were siblings, although she could have had suspicions and, maybe, that’s why she always showed antagonism towards that relationship.

Perhaps Moira’s relationship with Peter did not last and Moira thought Grace was Bill’s daughter. Another answer for this question is that Moira simply did not say anything to avoid the scandal, if it was known that she had slept with the husband of her best friend and neighbor.

7 ^ What happened at the end with Detective Juliet Wallace?

In the end, anticipating that Jay would testify against her, Juliet decided to anticipate her trip to India where a surgeon would try to remove a tumor from his daughter’s head. Her partner Andrew covered Juliet so she could leave the country at the last minute.

Andrew confesses to Juliet that he was lazy because he had lost faith in the system, that even if they caught someone, someone else would always appear, but Juliet’s tenacity to protect her daughter showed her that even ethics and morality have limits, limits related to love.

8 ^ What’s the meaning of the final scene of Retribution?

Interestingly the end of the series shows a conversation between Claire and Meredith, Claire tells the old lady, that many times we are forced to choose between what is right for us and what is right for others and that if we choose to do the right thing for us and it turns out to be the wrong choice, we must be prepared to assume the consequences.

If we believe Claire killed Lee Walsh, this speech would fit perfectly.If Claire murdered Walsh, she, who has always done what is right to the eyes of others, for the first time she would do what she considers to be right for herself. And if the speech is simply a reflection of everything that happened with the two families, it would still be a personal reflection to have enough criteria to decide the right thing to do from a personal perspective.

Questions? Annotations? Doubts? Insults? The comments section is open just below this post. See you in another post of Ending Explained, here on El Sabanero X.

Un comentario en “Retribution / One of Us ^ Ending Explained”