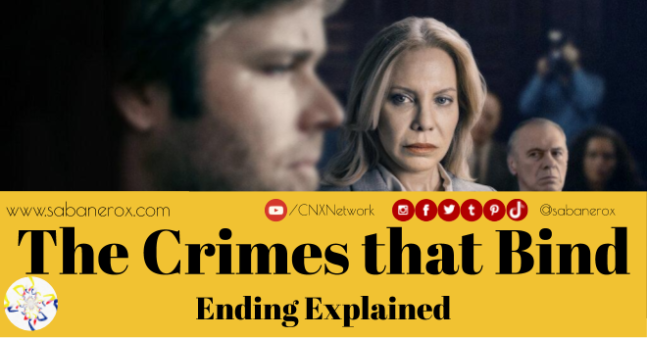 What is the most important thing to you? Is it the way you show yourself to the world? The way they look at you? Or is it family? Or is it to do what is right? And what happens when all the answers to those questions are in conflict to each other?

Argentinian director Sebastián Schindel bases the narrative of his most recent film Crímenes de Familia (International Title: The Crimes that Bind) – an extremely interesting study of characters, which mixes elements of suspense, social criticism and legal drama – on the question above.

Now, if in the 99 minutes of footage of the film, you have been left with any doubts, concerns and questions, do not worry, because right now and without further ado, we will explore in deep this movie, and what is the meaning of its ending.

1 ^ The Crimes that Bind is based on a book?

In a world where original productions are increasingly scarce, overshadowed by adaptations of books, comics and even television series, the logical question we ask ourselves when watching a new movie is – where can I find the book? But The Crimes that Bind is an original script by Sebastián Schindel and Pablo del Teso, although it has obviously been inspired by real cases, such as infanticides in Argentina.

2 ^ What is the book cited at the end of the film?

With her last strength, she says because / Her room had now grown icy cold, she then / Dragged herself to the latrine and there / Gave birth as best she could (not knowing when) / But toward morning. She says she was already / Quite distracted and could barely hold / The child for snow came into the latrine / And her fingers were half numb with cold.

You, too, I beg you, check your wrath and scorn / For man needs help from every creature born.

Undoubtedly an invitation not to judge, or at least not to judge quickly and viciously those women in this situation, who after giving birth to a child, alone, without support and with the weight of the world on their shoulders, and even with pathological and mental conditions, they commit acts that, under the uniform lens of society, can be seen as the most monstrous of crimes.

3 ^ What is the correct chronological order of the film?

Half of the film, the director has us on edge because he gives us two timelines: the first related to the trial against Daniel Arrieta (Benjamín Amadeo), and the second related to the arrest and trial of Gladys Pereira (Yanina Ávila), both related to Alicia de Arrieta (Cecilia Roth) an upper middle class lady in Buenos Aires.

Even at the beginning it is difficult to distinguish which timeline takes place before and which takes place after, but when we get to approximately 45 minutes into the film, we realize that Daniel’s story is prior to Gladys’s, until finally both converge coming to the end.

Daniel Arrieta, is the product of a bad upbringing on the part of his parents, Alicia and Ignacio (Miguel Ángel Solá). In fact Ignacio – in a bitter discussion with Alicia – makes a fairly detailed recapitulation of all the occasions in which Daniel got into legal and financial troubles, and his parents did not hesitate to save him, perhaps because they believed what he said.

In fact, the director himself tests our own perspective, with Daniel’s testimony, in which he clearly declares himself a victim of life and circumstances, and we – as viewers – are strongly tempted to believe him and take his side.

Daniel’s upbringing style, overprotected and without any moral compass that encourages him to do the right thing, leads him to turn his relationship with Marcela Sosa (Sofía Gala) into hell, even worse when his mediocrity and stupidity take him to financial ruin.

As Marcela says in her testimony, not only did he let her bear the financial responsibility of the house, but he also decided to use drugs, with the consequent wave of violence of which she and her son Martin were victims. Daniel even attempted to kill her.

After Marcela got the restraining order, eventually Daniel approached her house, and sexually abused her, which is why she sued him and Daniel ended up in jail.

Another element of suspense during the film is why Gladys is on trial. Initially, since there was talk of Aggravated Homicide, it can be imagined that she murdered Santi, her 3-year-old son. However, as the film progresses we see that Gladys was actually pregnant, without realizing it, and that she gave birth in the bathroom and then suffocated the baby, in an event that she claims not to remember.

The case had to have a significant impact on the press, since the trial took place in a larger room, with the presence of cameras, unlike Daniel’s, which was in a much smaller and even private room.

6 ^ Who is the father of Gladys’s children?

Near the end of the film, we see that Gladys confesses to Alicia that Santi’s father – and the baby who died in the bathroom – is none other than her son Daniel, who raped Gladys on several occasions.

Daniel had, apparently, the habit of requesting to enter the house, and steal money to get drugs, occasions in which he used to sexually assault Gladys. Assaults in which he indicated very specifically that if she said anything to his parents, he was going to murder her and her son.

7 ^ What did Alicia negotiate with Lawyer Echezabal?

Echezabal is a lawyer who does not try to ruin the processes in the courts but in the associated external factors. And he clearly told Alicia that, Daniel could only go free if the evidence against him lost validity or disappeared.

Echezabal used the money Alicia gave him (U$ 400,000) and managed to steal the evidence from Marcela’s rape kit, in which it was proven that the semen found in her was Daniel’s. Failing the test, the process was dismissed and Daniel was free.

8 ^ Why did Alicia decide to give the evidence to Marcela?

Because she realized that the monster in the story was not Gladys, as she had said at the trial, but her own son Daniel, who was clearly a rapist, as well as a scammer and aggressive man.

For the first time, Alicia understood the life she had built, with tea parties with her friends, cheesecakes, yoga classes, were a beautiful facade that hid the rottenness that she had caused by raising a monster like Daniel. However, with her social and marital life already ruined by her son, Alicia was also not willing to let her ruin the lives of her two grandchildren: Santiago and Martin.

So he made the decision to deliver the evidence to Marcela, which would sink Daniel, removing him forever from the lives of his grandchildren, and in addition to that, he would testify to free Gladys, providing as evidence, in addition to his testimony, the DNA of Santiago and probably that of the deceased baby.

9 ^ What does the end of The Crimes that Bind mean? What is the message of the movie?

In the end we see how Alicia finally manages to leave her past of elitist, and even racist aspirations, to make way for what is really important: doing the right thing for the good of her grandchildren.

And that is the message of the film, that there should be no contradiction between doing the right thing and doing what is best for our family, because they are concepts that are complementary, and in no way antagonistic.

The best way to protect and take care of our family is to do the right thing, even if it means forcing those people we love so much to face the consequences of their actions. And it is there, in the analysis of the acts, and in which their consequences should be, where we determine what is correct.

Alicia understood that the luxuries, what her “friends” would say, and the freedom of her son, were worth nothing when it came to protecting her grandchildren, for which she had to do the right thing. But this is where the question remains: do we have to wait until there is a situation of imminent danger to do the right thing? Isn’t it better to just do the right thing from the start, even if it hurts, before danger looms and threatens to swallow us whole?

Perhaps, what we must always do is to assess what matters most in our life, and how we can make it shine more brightly. And yes it can be difficult, but even a piece of coal, subjected to the harshest conditions of pressure and temperature, becomes a valuable diamond. What do you prefer for your family, especially for your children? May they be forever worthless pieces of coal, or on the contrary, valuable diamonds that stand out from the rest?

Alicia answered that question very late in her life, I hope that is not the case for so many mothers and fathers who are out there, thinking that they are doing their children a favor by preventing them from facing the consequences of their actions or, worse, their negligence.

Questions? Annotations? More doubts? The comments section is open just below this post so feel free to use it. See you in the next installment of Ending Explained here at El Sabanero X.